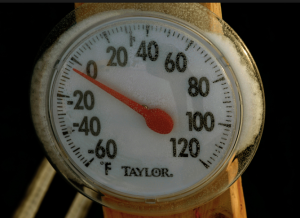 My goodness ….. it has been COLD around here, today. I live in the eastern US, and the term “polar vortex” has been on everyone’s (frozen) lips.

When I glanced at my iPhone during the night, one of my apps had thoughtfully left a chilly notification on the screen “temperature has gone below 0.” 😯

Schools were closed and reporters were on the streets, tweeting pictures of bank-temperature signs announcing numbers like -7 and -3.

Made me wonder: Can iPhones work in that kind of cold?

Turns out that the answer is: Nope. Your iPhone will fail in sub-zero temps.

Apparently the screen display and the battery can not handle these extreme temperatures. Apple tells us that the iPhone battery functions best between 32 and 95 degrees Fahrenheit. (-2 is a long way from 32!). When the phone starts getting sluggish, it’s your signal to warm it up. Put it in your pocket or tuck it in somewhere against your body for warmth. 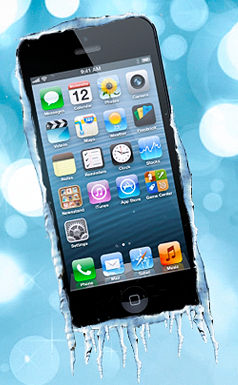 In 2012, the Mikro PC (PC World Finland) put some phones to the temperature test. They started in a room of 32 degrees and started lowering it in steps of 9 degrees until eventually all phones stopped working.

The iPhone 4s that they tested started acting odd at 23 degrees and and at 9 degrees it stopped working altogether. Some other phones kept functioning as the temps continued to drop. Non smartphones made it all the way to -40, but that was the limit for any phone. You can read all about this test by clicking here.

I heard one newsperson announce that compared to being outside, you would be warmer if you climbed into your freezer. Yep, it’s pretty cold.

When you venture out, remember to bundle up … good advice for both you AND your iPhone.

11 thoughts on “Careful! The infamous Polar Vortex can hurt your phone!”

I'd love to hear what you think! Cancel reply